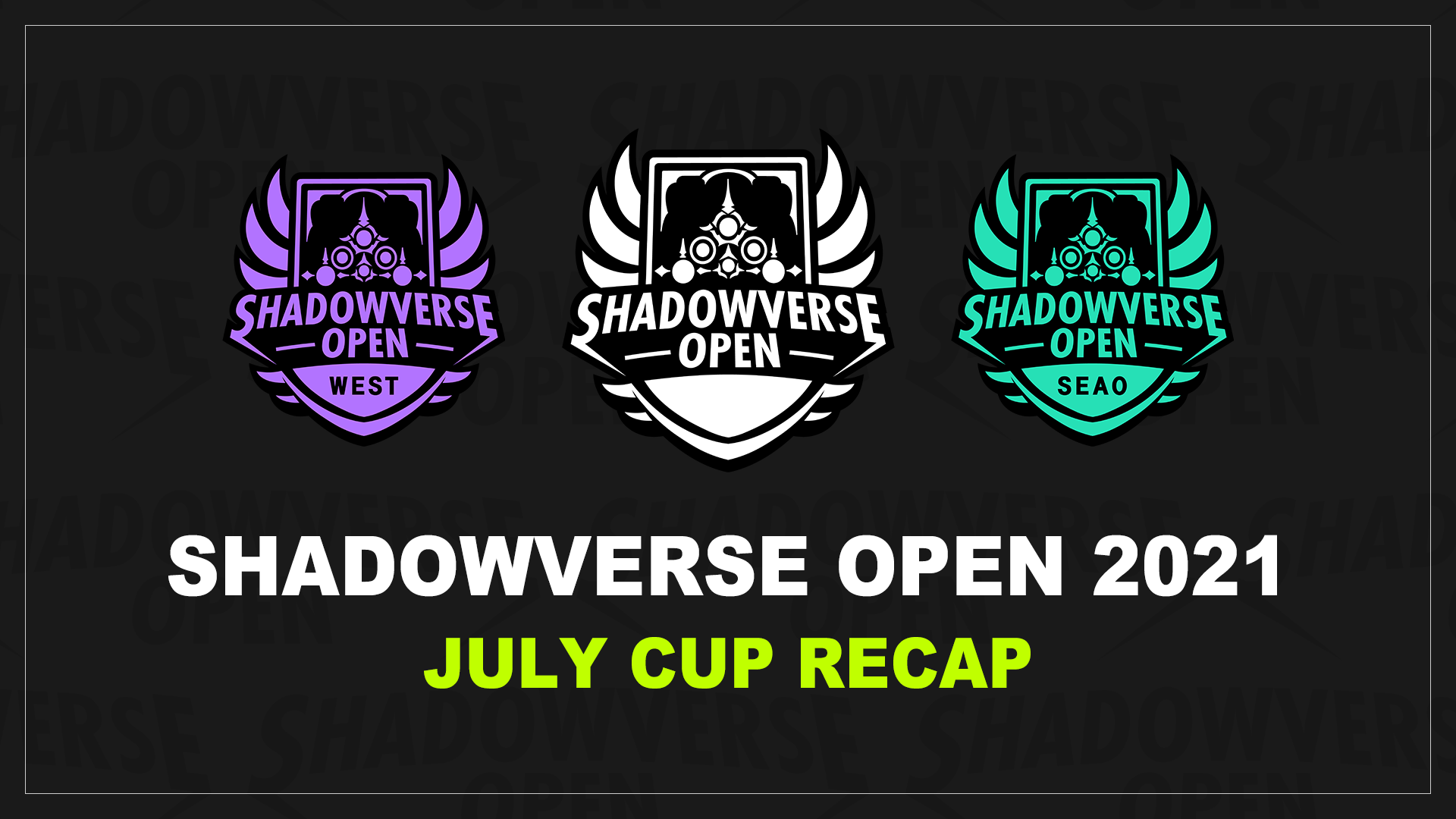 The past two weekends in the Shadowverse have been filled with shockingly close match-ups and intense back and forth duels. Just one misplay would have been detrimental to a player’s standings on the leaderboard. With the Contenders Cup only a few months away, July was a crucial month for players looking to qualify. In this recap, we dive into all the exciting highlights and big plays of SVO July.

As usual, the top 10 card picks per class are available here.

Got awesome ideas? Share it with us in the #all-feedback channel of the SVO Discord.

Congratulations to Dis.Vetu from Team Disastra, the SVO West July Cup Champion! After an epic comeback against MS Charm in the first round, Dis.Vetu secured a 2-0 victory with an Accel Forest and Mysteria Rune lineup. Incredible gameplay from this SVO Veteran launched him into the Top 12 with 33 league points. 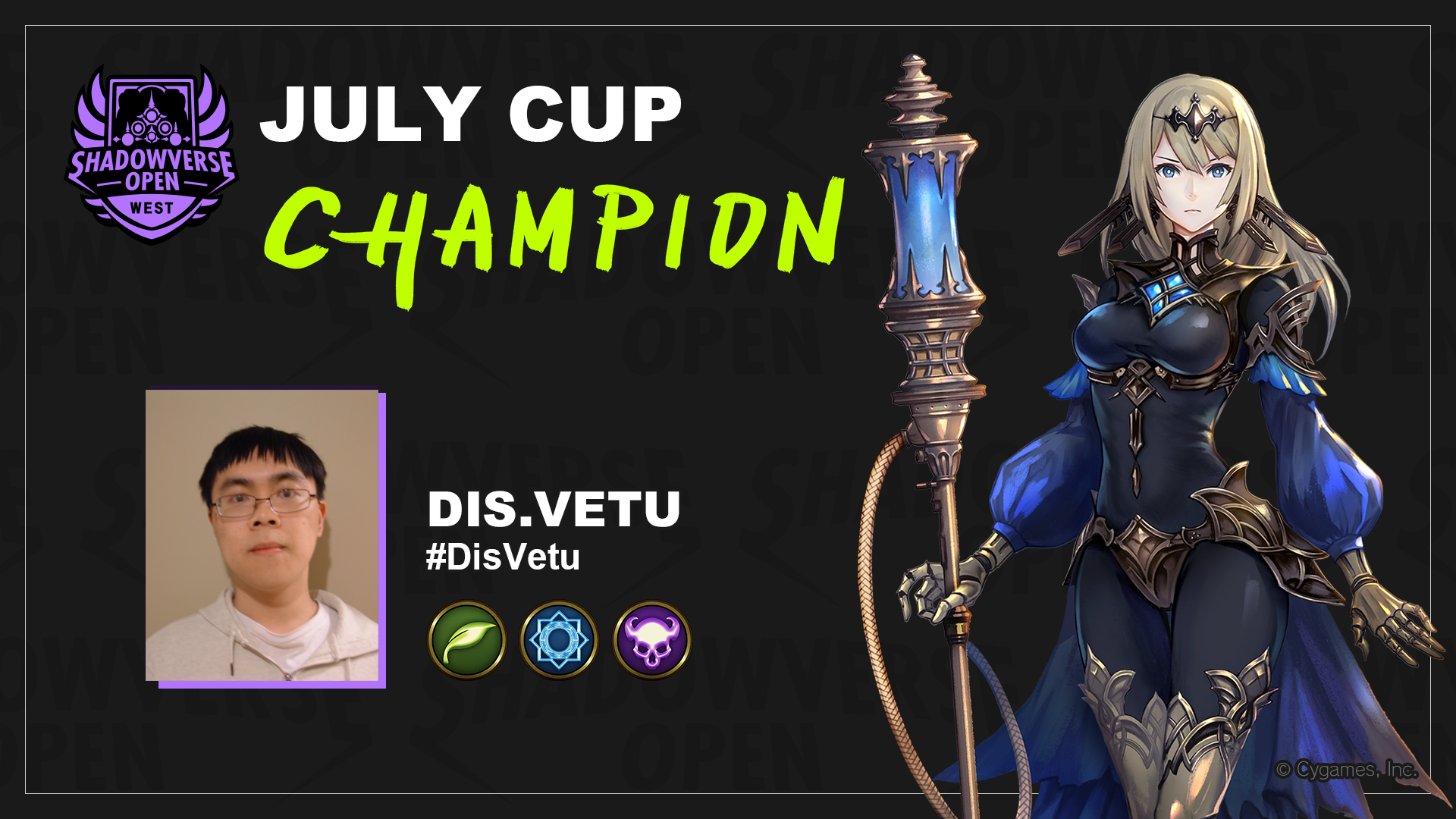 Half of the matches in the Finals saw a round 3, as competitors put on quite the display of skill in the Top 8. 2nd placer MS Charm had a clean 2-0 win in the quarter finals, a tie-breaker in the semis but unfortunately was unable to defeat Dis.Vetu in the Grand Finals. Multiple mirror matches and many players banning Shadowcraft made for an exciting bout of duels. 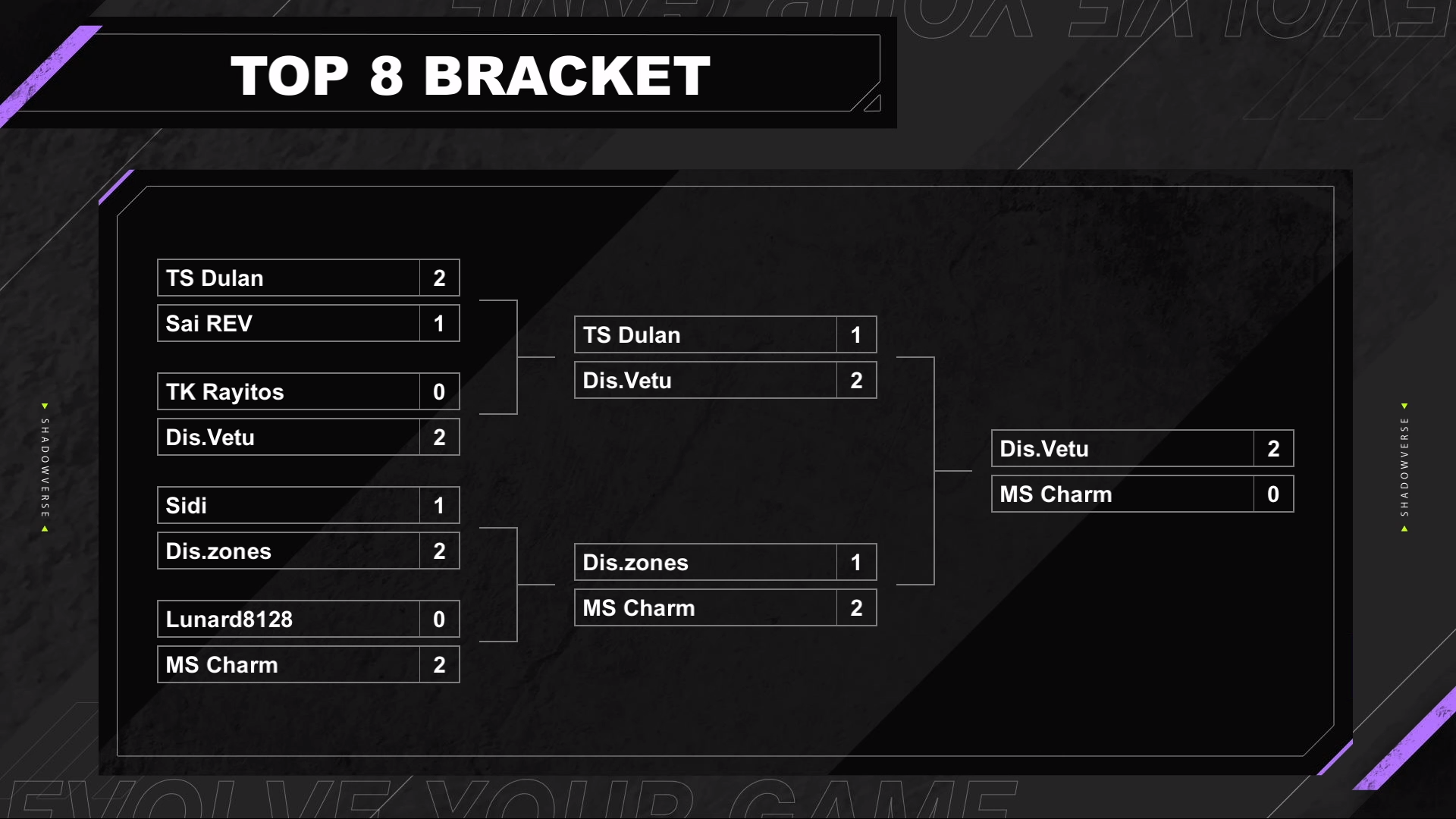 TS Dulan had an impressive performance in Day 1 of SVO as the only player to go 7-0 in the swiss rounds. Despite not winning a single SVO tournament this year, TS Dulan has managed to secure the top spot in the current leaderboard! Consistency is key, don’t you agree? 5 players are currently tied at 33 points with only 1 point separating them from the Top 2 league point leaders, it’s anyone’s game! 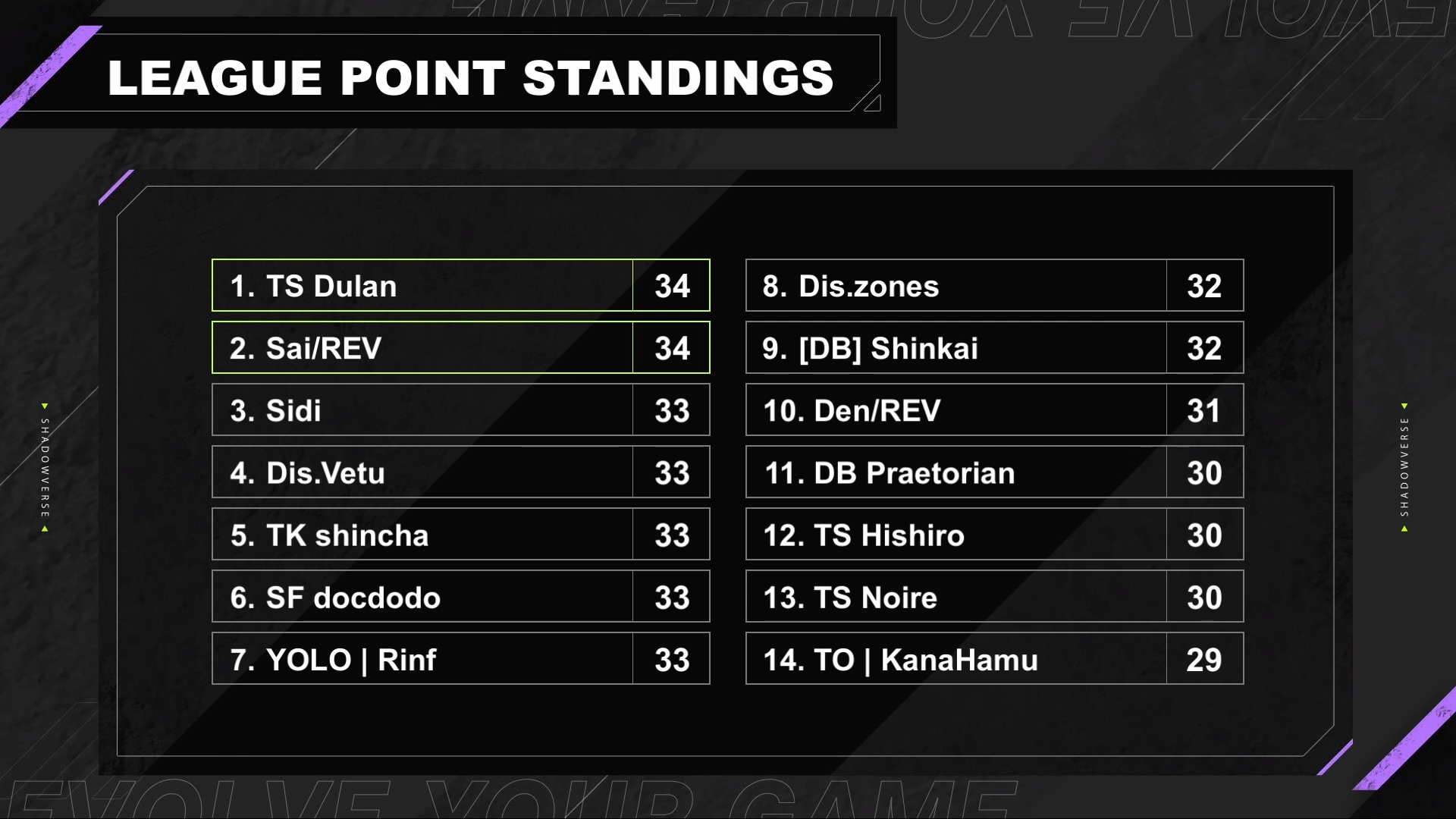 For this month, the most popular cards in their respective classes were Ladica, Mistolina & Bayleon, Wicked Rebirth, and Belphomet. Yet despite the popularity of Belphomet, it came as a surprise to many that Portalcraft was nowhere to be seen in the Top 8 for the West region. 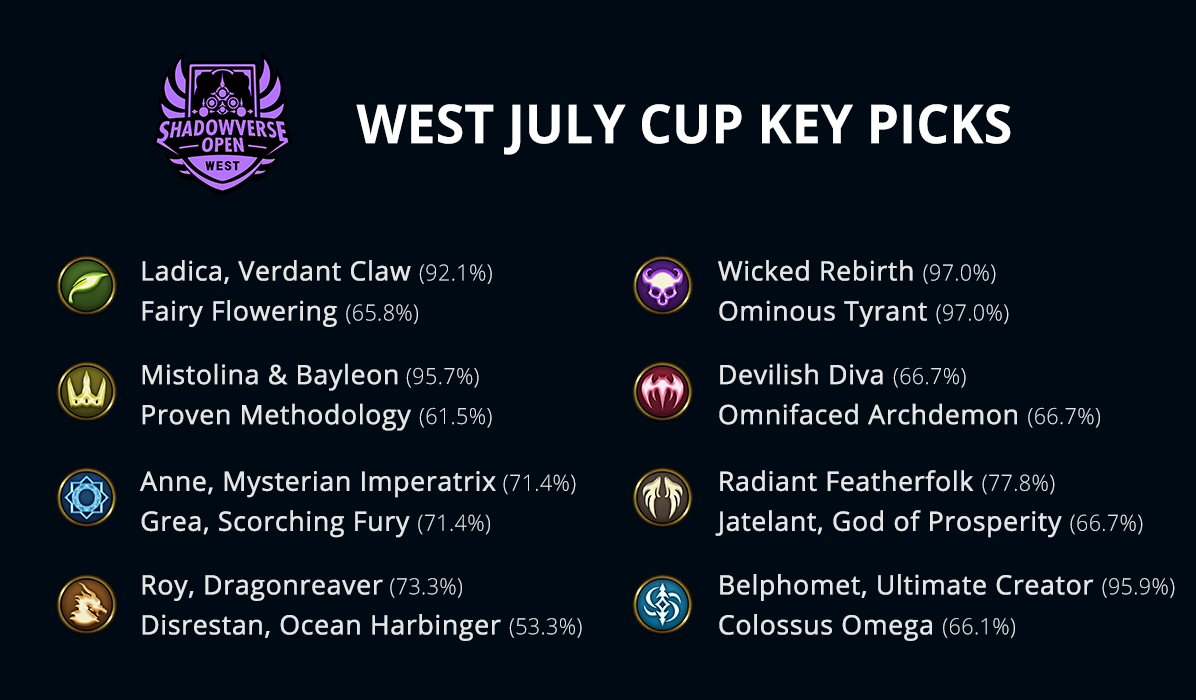 Class pick rates were quite similar to the classes picked in the SEAO region. Last Word Shadow and Machina Portal remain to be a popular choice in July, though we also see a significant increase in Swordcraft and Runecraft usage. In comparison to June, Dragoncraft decreased quite significantly by 67.2%. 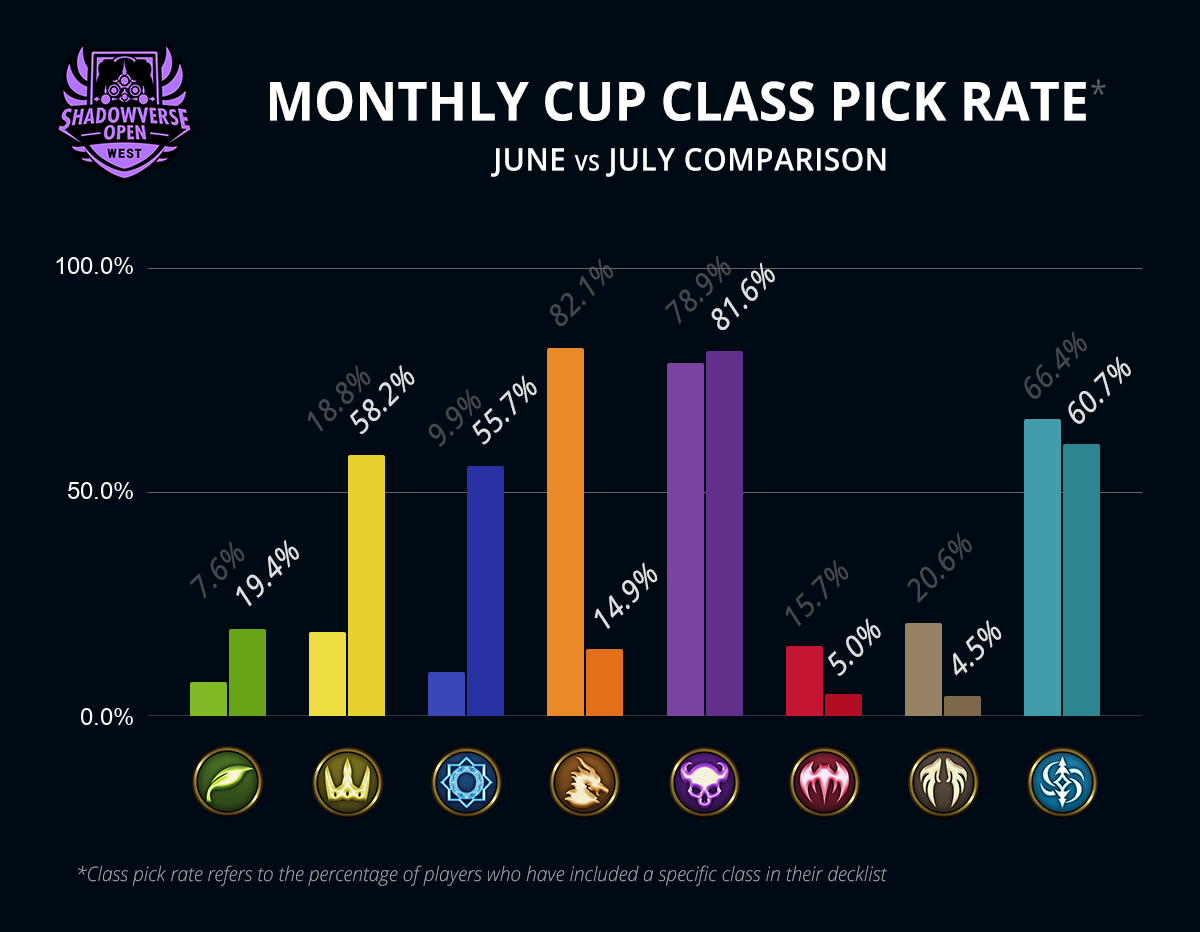 After months of climbing and battling his way through multiple SVO Finals, Burn from Gallant Tricksters finally made it all the way! The pressure was on and you can bet, we definitely felt the burn! Congrats GT Burn on becoming SEAO July Cup Champion! 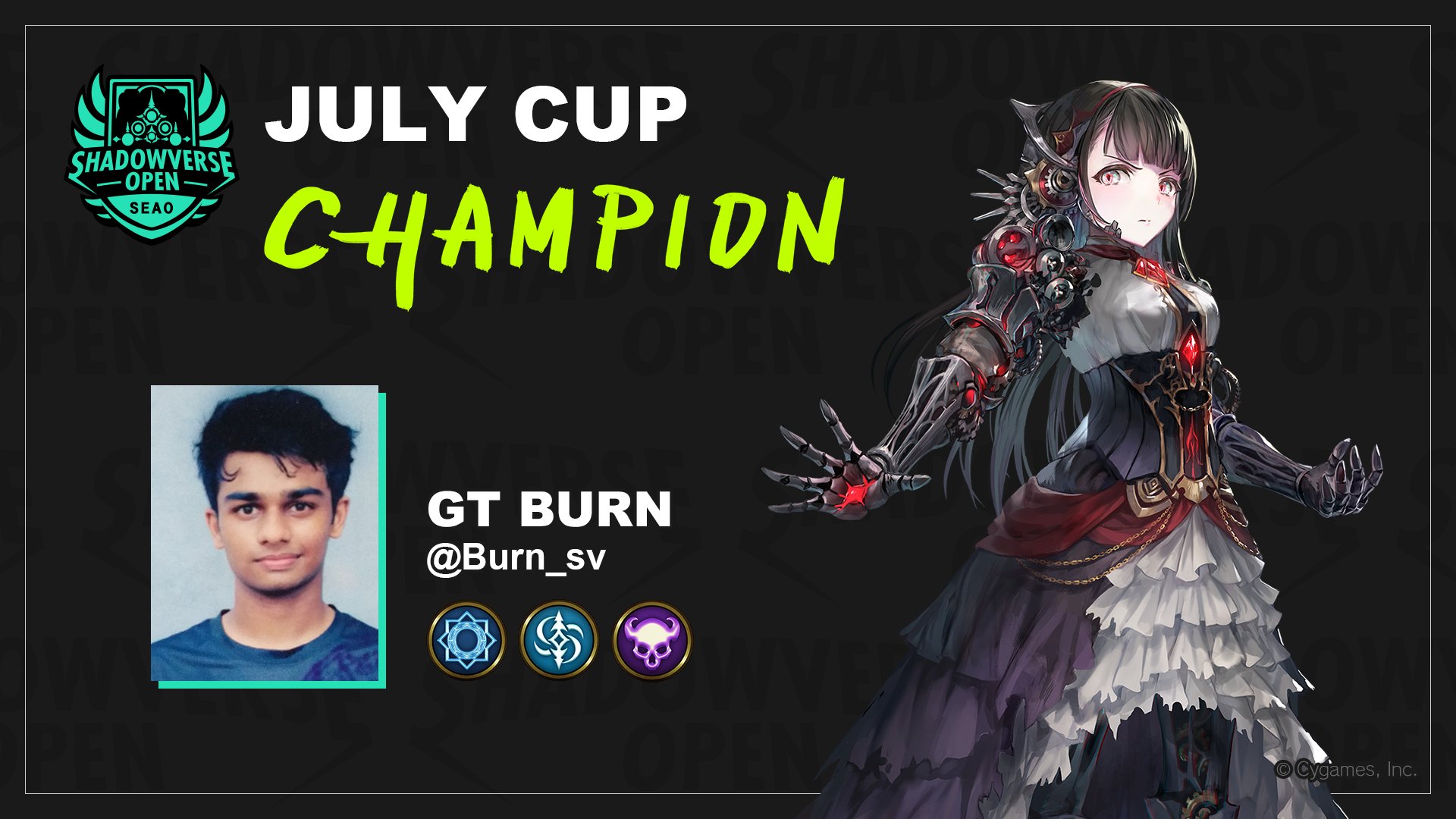 Talk about nail-biters! Six out of the seven matches in the Finals saw a game 3, including the Grand Finals match against THGB Har3m and GT Burn. DB Karakiri and ほたる successfully went through Day 1 of SVO without losing in the swiss rounds but were unfortunately eliminated in the quarter finals of Day 2. Huge special mention to second placer, THGM Har3m who managed to win game 3s in both quarter and semifinals but ultimately was defeated by July Champion, GT Burn. 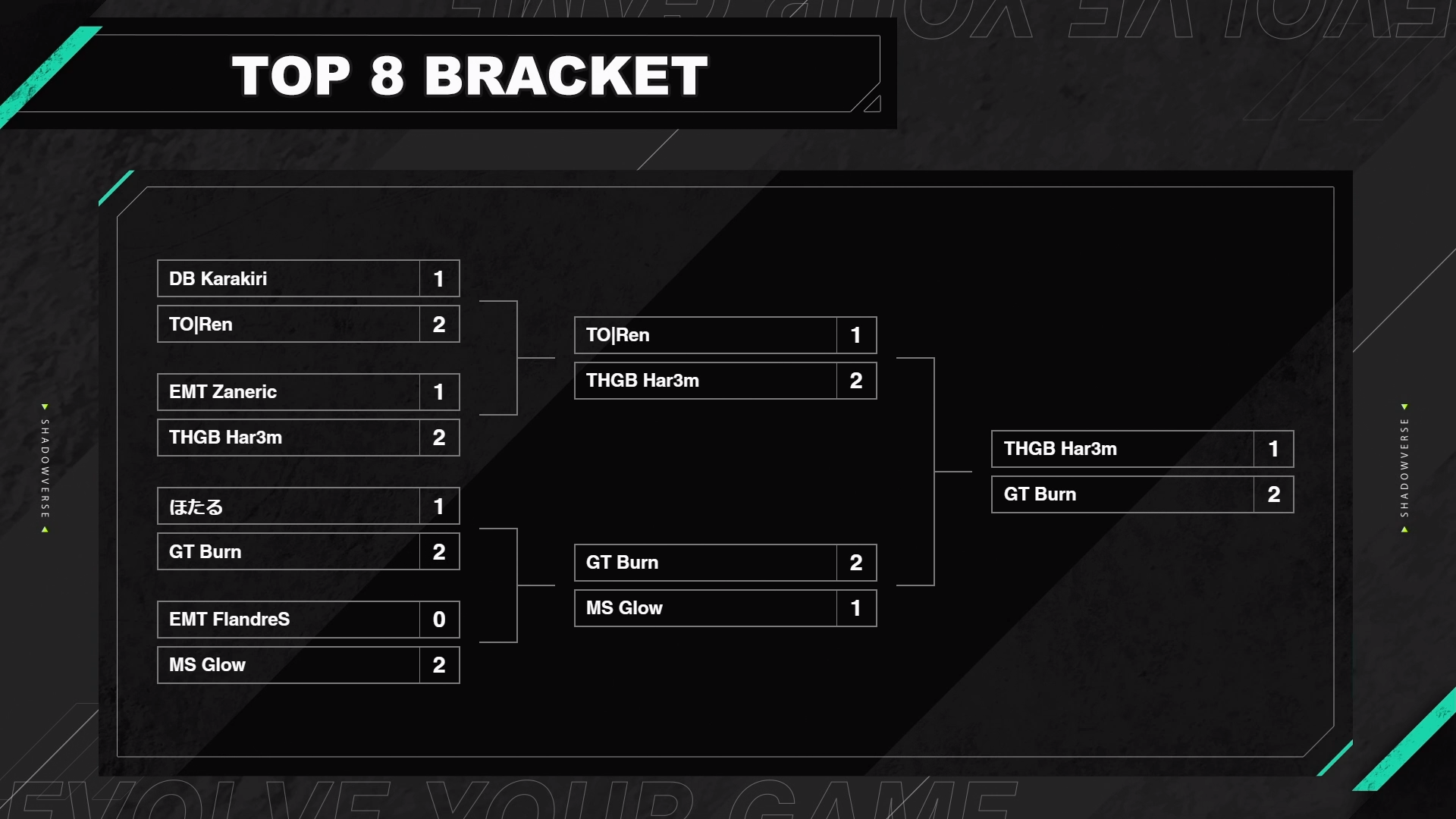 If you thought you’d be seeing a clearer picture of the standings this month, you’re in for a treat! Once again multiple players (seven to be exact) are currently tied at 31 points with the next three competitors closely behind tied at 30 points. S5 BMA remains at the top of the leaderboard with TS Essia and THGB Har3m right on his tail. 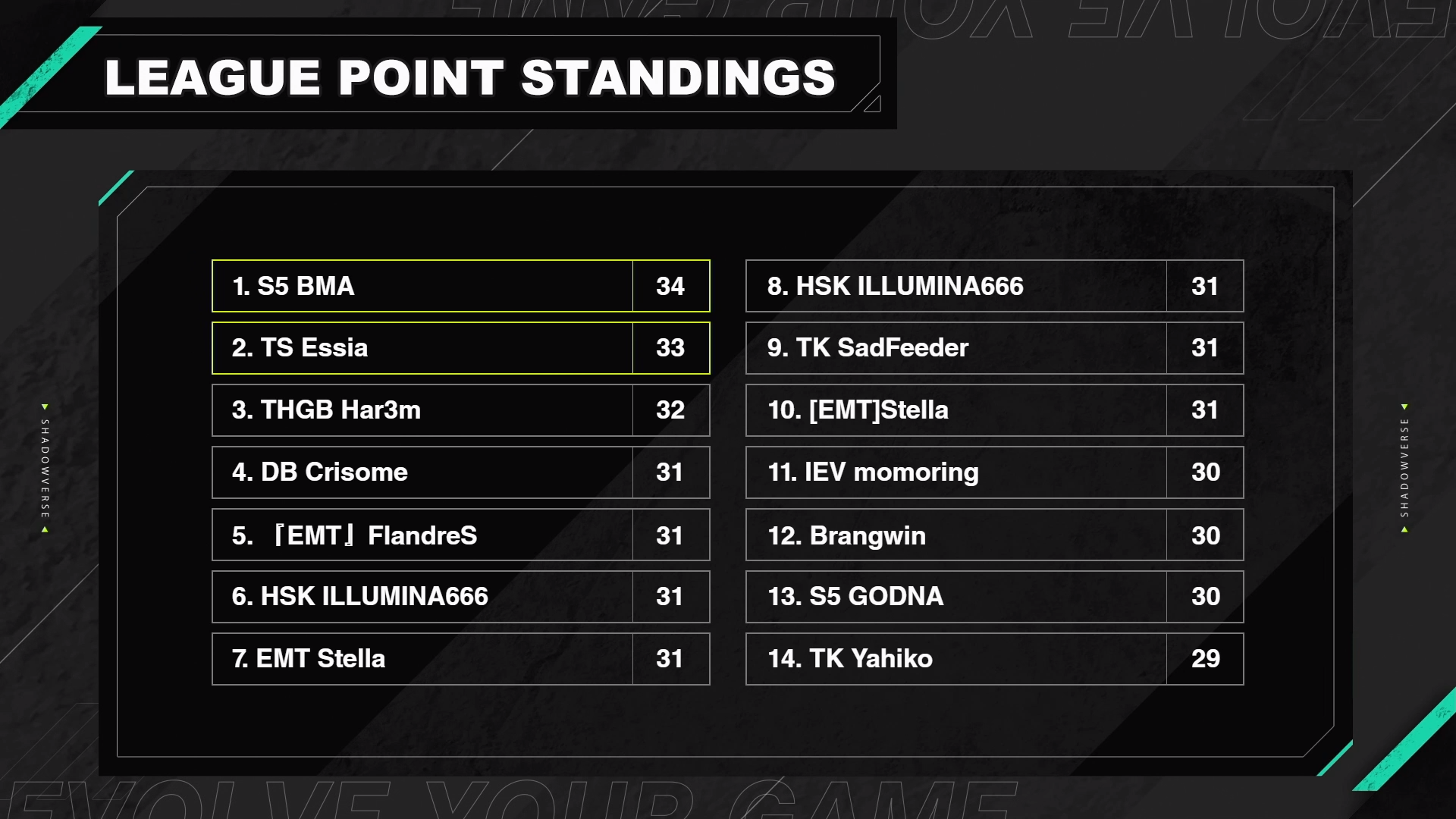 Card picks for SEAO are quite unique compared to the picks for West, showing just how diverse and interesting the meta of Renascent Chronicles is! The most popular picks in respective classes were Gigantic Blossom for Forestcraft, Tetra, Serene Sapphire for Runecraft, and Mega Enforcer for Portalcraft, with over 90% of players with each class bringing these cards. 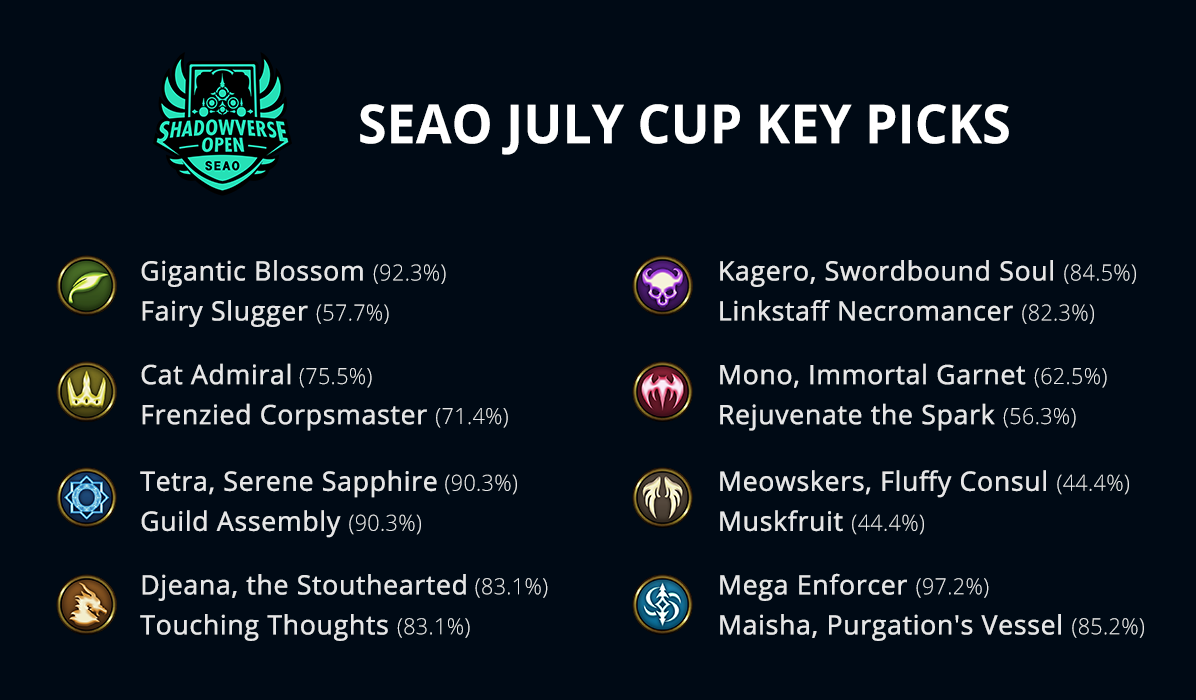 Class pick rates for SEAO looked almost identical to class pick rates in the West region, though there were slightly more Portalcraft users in SEAO. Shadowcraft continues to be the most popular class in both regions and it looks as though many players have left Dragoncraft out of their playbooks this month. 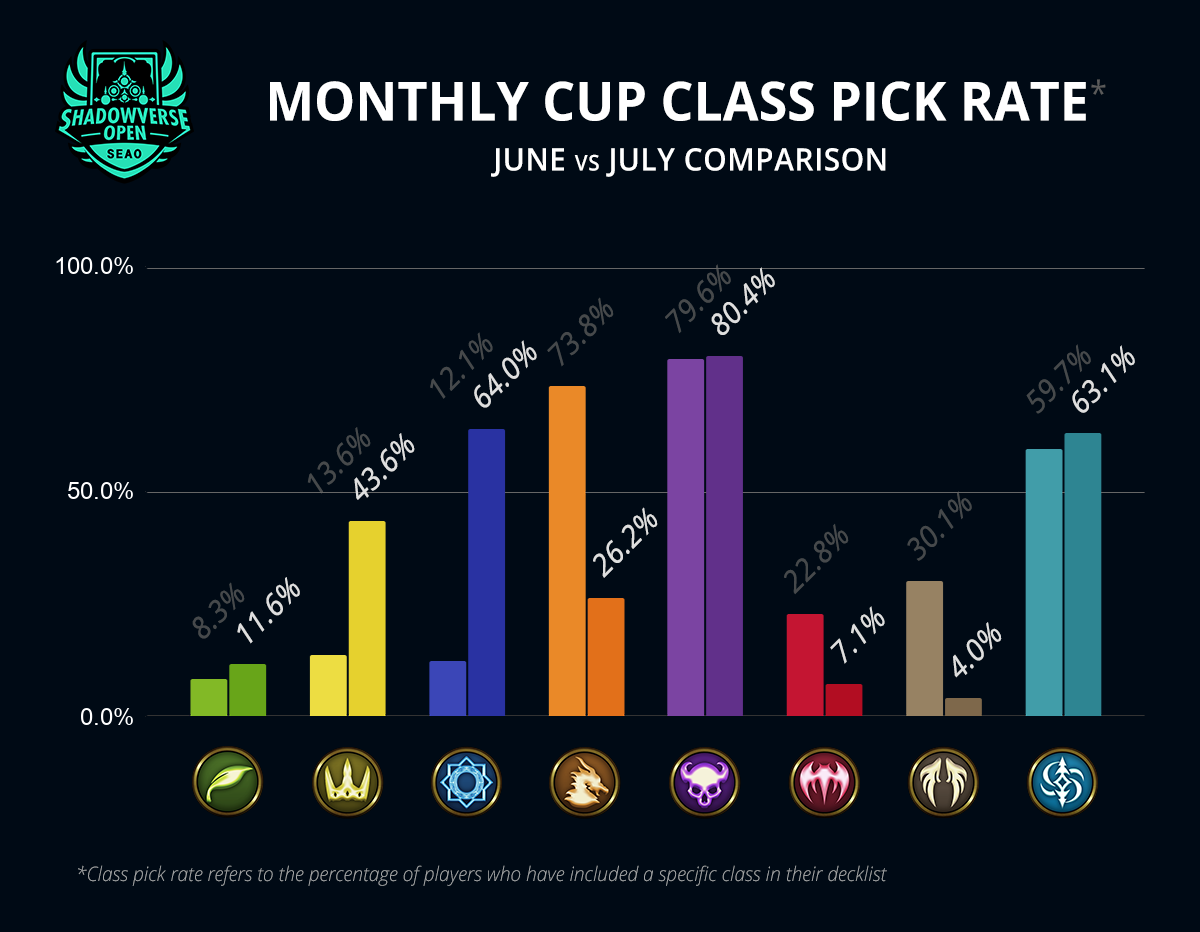 With more players getting accustomed to the new meta, the last two SVOs will test how well the competitors adapt their decks and strategies for their upcoming duels.

Make sure to follow us on Twitter, and join our Discord to stay up-to-date on all the Shadowverse action!

If you are a livestreamer and would like to host SVO on your channel, let us know and we’ll add you to our #SVOWatchParty list. Streamer badges are available for download here.

See you in August, SVO!