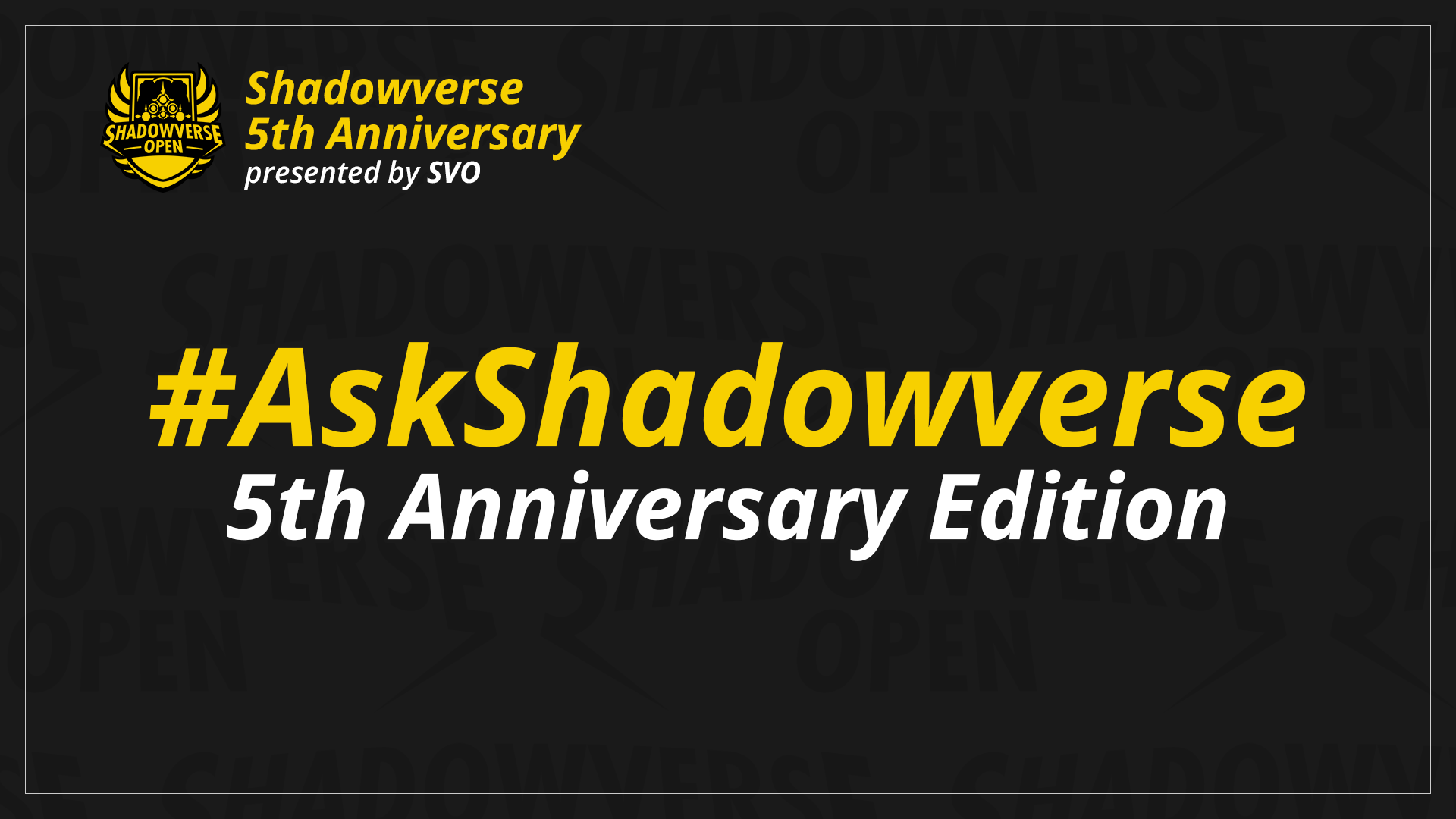 On June 26, the Shadowverse Open casters, players, teams, as well as Shadowverse content creators, teamed up to celebrate the 5th Anniversary of the game. One of the sections in the livestream was #AskShadowverse, where the dev team behind the game answered select questions gathered through the hashtag back in March.

Below are the complete answers to all questions picked up by the dev team!

What are some of the developers’ favorite cards in Rotation?

My favorite is Zelgenea, The World.

I love the card art, and I believe it delivers wonderfully on the concept of “Arcana Spirits (gods of the arcana).” [Author’s note: This was the guiding concept for Fortune’s Hand.]

Mine is Wolfraud, Hanged Man.

We put a lot of effort into the story and characterization of Fortune’s Hand, our tarot card-themed card set, but I’m especially partial to Wolfraud’s design and card effects.

What makes you proud to work on Shadowverse?

The fact that we have so many players enjoying the game.

We first started developing Shadowverse because we wanted more people to discover the thrill of card games.

So, I’m overjoyed whenever someone tells me they started playing card games because of our work.

I’ve always liked card games, so I’m proud to be involved in developing one.

Seeing players engaged seriously in matches at the top of the competitive scene, such as the World Grand Prix and RAGE Shadowverse Pro League.

I’m touched and proud that Shadowverse, a game we developed, has had such a big impact on players’ lives. This is what drives us to provide the best game experience we can.

Who is your favorite character from Shadowverse’s story?

Urias is my favorite.

The first time we recorded audio for the game, I was in charge of writing his direction notes. I guess I have a soft spot for him.

I don’t have a favorite, but if I had to choose, I’d say Belphomet.

It’s too difficult to pick just one character, as they all have their own appeal.

That being said, we do take special care when designing cards for story characters, because we want to do a good job translating their individual traits into game mechanics.

How much planning goes into keeping up with the quarterly release schedule for new card sets?

We start with the development of game mechanics around 4 months in advance, but whenever there’s major updates, we tend to schedule a longer dev time.

For example, with the keyword Fusion, we started the development more than half a year before its release.

Do you ever have tournaments among the developers? Who’s the best player?

Every time we release a new set, we hold a teamwide tournament.

The grand finals are cast by the card design team members, with our colleagues spectating from large monitors placed throughout our offices.

As for the best player, the winner differs every time, so I think it’s quite the competitive environment.

How often do you guys rerelease older cards, such as Jeanne and Albert, into newer sets? And what is the thought process behind choosing which cards to rerelease?

There is no specific rule for this, but we basically try not to have two versions of the same character in Rotation.

Then again, Medusa and maybe a few others have existed as two separate cards within the same Rotation period several times before.

How did you decide on the story, setting, and aesthetic for Vellsar?

The theme of Fate’s Trigger was inspired by the Wild West, so, in order to return to our dark fantasy roots, we decided to go with demi-humans (like vampires and werewolves) as the main characters for Entropy’s Abyss.

In the accompanying Darkness Over Vellsar card set, we explored what would happen to our classic characters if they had been swallowed by darkness.

As for the plot, we think of our story in terms of a full universe, so it’s not something that was developed in isolation. I’d better not say more than that or I’ll accidentally give away spoilers.

And finally, as for aesthetics, we created a world based on concepts given to us from the environment art team.

The dev team has said that they take a card’s lore into account when designing cards. For example, to activate Prophetess of Creation’s Invocation, a player must play cards with costs 1 through 10. This was to represent the myriad prophecies that Teo [the character featured in Prophetess of Creation] shares with the world. What would you say was the hardest card to design a lore-appropriate effect for, and why?

We had a hard time with the “Arcana Spirits (gods of the arcana)”, which appeared in Fortune’s Hand.

These cards were inspired by the major arcana of the tarot, each having its own way of expressing its ordinary and reversed positions. Mechanically speaking, each card was designed, as much as possible, to reflect its corresponding tarot’s number, meaning, and position (ordinary/reversed).

By matching the lore of the character with its card mechanics—especially if those mechanics are complex—it becomes easier to remember what the card does. Not to mention it just feels right.

Is it true that the Card Design Team playtests using paper cards?

It sure is. When we make new cards for new sets, before we even program them into the game, we have to make sure they actually function, that they’re interesting enough, and whether they’re balanced or not.

So, to check all of that, we conduct playtests with paper cards, just like an analog card game.

Was your question answered by the devs? If not– fear not. Watch out for more potential #AskShadowverse in future livestreams!