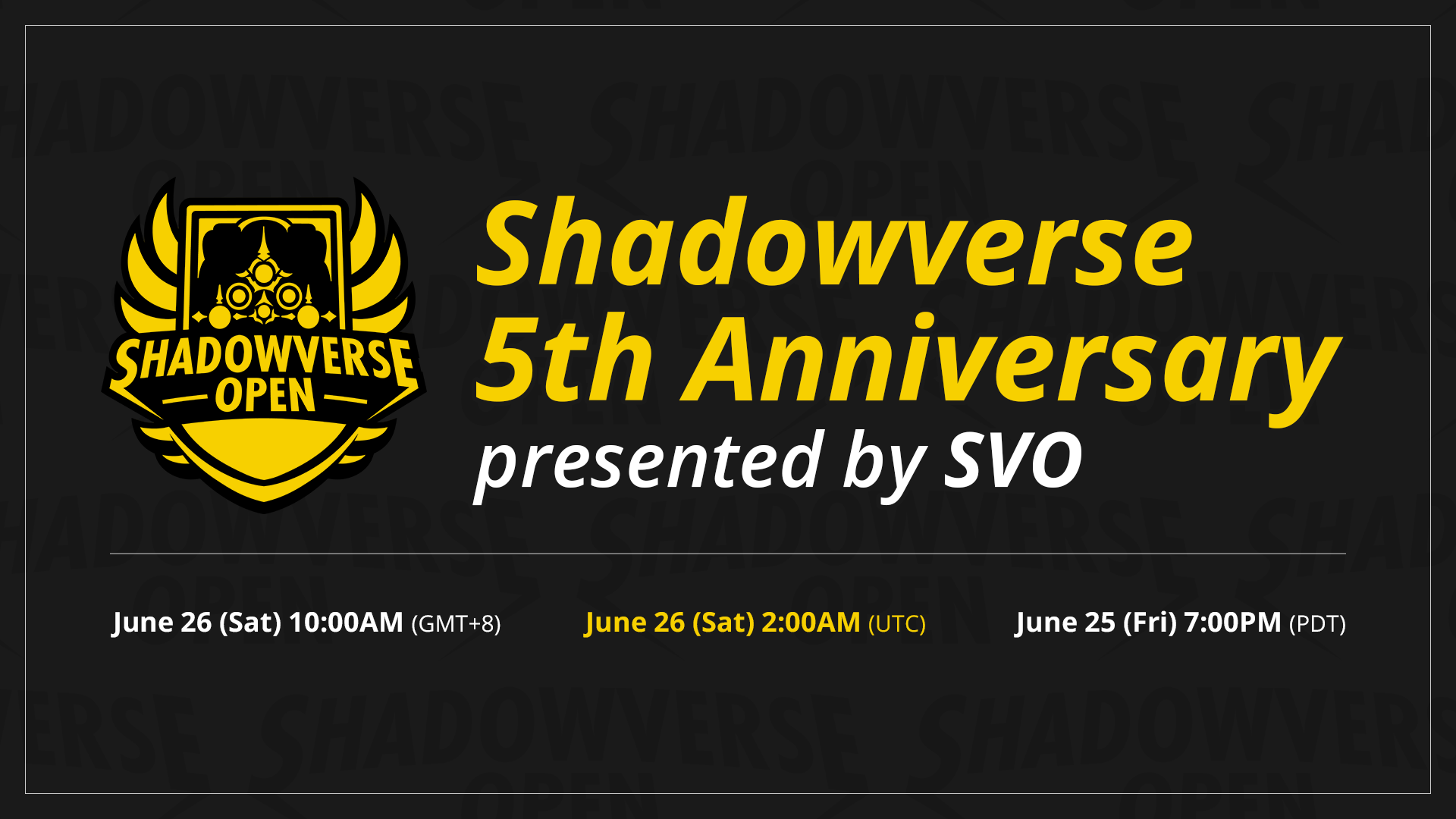 5 years with a loving community.

1 epic party to celebrate it all!

What an amazing ride it’s been through 5 years in the Shadowverse! Celebrate this major milestone with us at our Shadowverse 5th Anniversary Livestream on June 26th (GMT+8).

Join us for a talent-filled content creators panel, exhibition matches from some of SVO’s top players, an epic battle between WEST and SEAO, a surprise reveal and so much more! The 5th Anniversary celebration is packed with surprises you won’t want to miss!

Catch the celebration LIVE on our official Twitch channel SVO_Esports. A VOD will also be uploaded on the SVO_Esports YouTube channel!

In the celebratory livestream, we’ll be welcoming all four of our regular SVO casters: Luis and Kris from WEST, as well as Ignideus and East from SEAO. With these dudes in the house, it’s gonna be a party and you know it.

Watch out for your resident players Zhiff and Zigurd, as we get more insight into their life as Shadowverse content creators. They will also engage in an exhibition match to prove their prowess, knowledge, and decision-making skills in the game.

The livestream will also feature #AskShadowverse for the first time! The devs behind Shadowverse answer some of your questions, gathered through the hashtag shared in March. Make sure to tune in to find out more about the development behind your favorite card game!

Among the pool of talented players from both WEST and SEAO, two players have been invited to represent their respective region. From the WEST reigns Hishiro from Tempo Storm, and from SEAO hails Kio from ManaSurge. They will battle it out in an exhibition match to prove which region is superior, once and for all. It will all end here… or not.

Witness a friendly 3v3 exhibition match between ManaSurge and Team Dawnbreakers, in a first-to-3-rotation format. The roster for each team is as detailed below!

As the release of the new Renascent Chronicles expansion pack approaches, we’re excited to be revealing a new card in the stream! Don’t miss out on this exclusive reveal.

Lastly, we want to say thank you to every single player who has contributed to the Shadowverse family in the past 5 years. The welcoming and loving community you’ve created is the reason we are able to celebrate this milestone! We look back to appreciate the amazing years we’ve had and look forward to all the things that await us in the future!